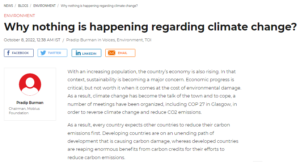 With an increasing population, the country’s economy is also rising. In that context, sustainability is becoming a major concern. Economic progress is critical, but not worth it when it comes at the cost of environmental damage. As a result, climate change has become the talk of the town and to cope, a number of meetings have been organized, including COP 27 in Glasgow, in order to reverse climate change and reduce CO2 emissions.

The continuous debate also highlights the fact that we will never stop communicating until the climate becomes irreversible and creates challenges such as rising sea levels, raging storms, searing heat, ferocious fires, severe drought, and widespread species loss. The effects of climate change are threatening health, communities, the economy, and a sustainable future. Thus, we indeed need to limit carbon pollution and aggressively move away from dirty fossil fuels toward cleaner power.