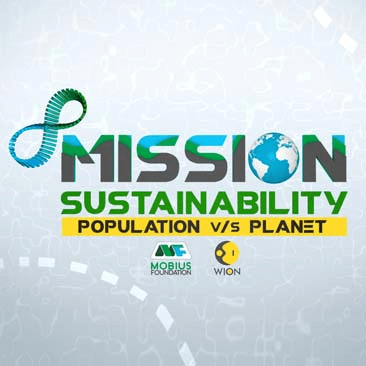 Vision: At the root of most environmental problems is the Human Population Explosion. And yet, it is often left out of discussion about climate change, global warming, pollution and habitat loss. Unless we address the issue of the rising and unsustainable population, we are fighting a losing battle.

To tackle any problem, the first step is always to talk about it. And through Mobius Foundation’s new initiative, we are bringing the issue in the limelight. The ‘Mission Sustainability: Population VS Planet’ is a new social initiative started in partnership with Zee Media to start nationwide conversations on the soaring population of India and its environmental impacts.

The launch of this year-long initiative took place on 20th Feb 2021 from 17:00 to 19:00 Hour IST. The event started with the Hon Prime Minister’s message on increasing population in our country: “Population Explosion can cause numerous new problems for us and our future generations, but there is a vigilant section of the public that is aware of this issue”. Health Minister, Dr Harsh Vardhan also shared his appreciation for this campaign with a special message: “Population boom has been affecting the planet and the human race in many ways, people in developing countries like India feel the impact of environmental problems more acutely.” The launch of this campaign was divided in three sessions:

In the first session, we talk about environmental problems like air pollution, climate change, loss of biodiversity and how all these are linked directly to the soaring population across the globe.

Excerpts from my session:

Air pollution is a serious issue that is crippling our young generation with severe health problems like asthma, lung diseases, etc. While air pollution is apparent, climate change poses a greater risk, especially with the increasing population.

Another consequence of overpopulation is the loss of biodiversity. We live on a planet with limited land resources. To accommodate the increasing population, forests that are home to millions of flora & fauna species are cut down. And this loss of habitat has endangered our wildlife.

Today, 90% of scientists globally believe that climate change is a problem. And an urgent effort is needed by governments worldwide to step up for change.

Population explosion is a long term problem that would take 100 years to stabilize. However, for immediate efforts to save the planet, a lifestyle change is imminent with a focus on clean energy.

We are in an environmental crisis that requires our immediate attention. To revive our planet, there is a need for immediate action and in this session, we discussed exactly that.

Excerpts from my session:

To revive the planet, I focused on two major aspects: Environmental Education & Population Stability through:

Under this project, the Mobius Foundation spreads awareness about family planning and birth control methods to young couples in rural India. Through this initiative, various health camps, awareness drives and contraceptives distribution are undertaken. We currently focus on two major districts of Barabankhi & Baraich in Uttar Pradesh.

To educate our future generation about the environment, we are establishing the first of its kind environmental school in Coorg. The school will teach children to look after nature, lower the carbon footprint, and be sustainable through practical experiences.

Established in the rural area of Atrouli, Gyan Anant Vidyalaya will focus on sustainability education. The purpose of having the school in a rural area is to get the locals and children involved in saving our planet.