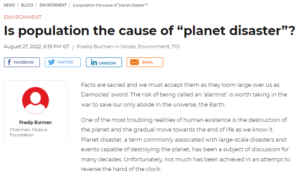 Facts are sacred and we must accept them as they loom large over us as Damocles’ sword. The risk of being called an ‘alarmist’ is worth taking in the war to save our only abode in the universe, the Earth.

One of the most troubling realities of human existence is the destruction of the planet and the gradual move towards the end of life as we know it. Planet disaster, a term commonly associated with large-scale disasters and events capable of destroying the planet, has been a subject of discussion for many decades. Unfortunately, not much has been achieved in an attempt to reverse the hand of the clock.

From acidification of water bodies, rising sea levels and climate change, to global water crisis, air pollution, and large-scale extinction of species, so many human activities have altered the ecosystem and affected its balance significantly. Some theorists have pointed toward rising population as the major cause for planet disaster, underscoring the situation where there are now too many humans for the limited space and available resources on planet earth. It will be in the fitness of things to examine this line of thought.