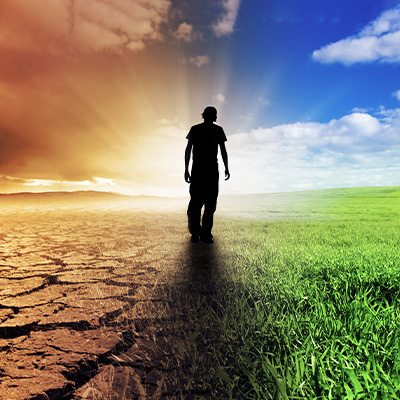 The rate at which humans have accelerated climate change on our planet is both unprecedented and exponential, thus the havoc it has caused on our planet’s ecosystems is unforgivable. What used to take millions of years of super-volcanic activities unfolded in just under 300 years due to industrialization. We know that Climate Change is not new for Earth, as hot and ice ages have kept on periodically occurring throughout our planet’s 4.5 billion years of age. However, humans have accomplished this change so fast that if our technological solutions cannot fix it in the next few decades then it would be too late.

Even though predicting the future for us is truly impossible and yet we can still feel the full impact of our actions even now. The myth that climate change’s worst impacts will be felt ages from now is both dangerous and highly susceptible to our today’s conditions. Most people are too busy with their lives to notice the changes that creep up at them. But we now fully understand that it is already affecting people worldwide in so many ways that revolutions in the near future may be inevitable.

The age of humans is so drastic and impactful that it is now called the ‘Anthropocene.’ And what is happening to us now is called ‘Anthropogenic Extinction.’ This is the 5th Mass Extinction that has ever happened on our planet, but it is the most drastic and brutal. So many species of plants and animals are dying each day that they are dying faster than we can even identify them. Usually, during these extinctions, animals have the time to evolve against such changes that unfold over millions of years. But, since we have done this in just over 300 years, most animals or plants stand no chance.

The world’s oceans are already deserts, and now what little oases were left are dying as we see coral reefs turning skeletal, shell creatures losing their calcium, and plastic slowly replacing the fishes. All these changes impact human life directly as we ourselves are dependent on most of these systems. Forest fires are ravaging California homes, and cities in China and India are choking with clouds of smog, while Australia and Europe burn in searing waves. Crops fail in Africa, and cyclones and typhoons ravage our coastlines. We break the limit of having the hottest year, every year. Climate refugees have already begun migrating while water scarcity increases.

All these pressures are mounting and the scientists have already rung the warning siren. If we don’t wake up and listen to it now, nobody knows the extent at which we can damage life on Earth.